Read more about how we strengthen corporate responsibility within our company

Find out more about the development in our ALD business

INTERVIEW WITH THE CFO

As revenue returned to solid growth again in 2017, Chief Financial Officer Peter A.M. van Bommel explains the importance of continued investments to position the company for long term growth. In the following interview he discusses some of the key financial topics that impacted the company in 2017 and comments on the reduction of the stake in ASMPT that was executed during the year. 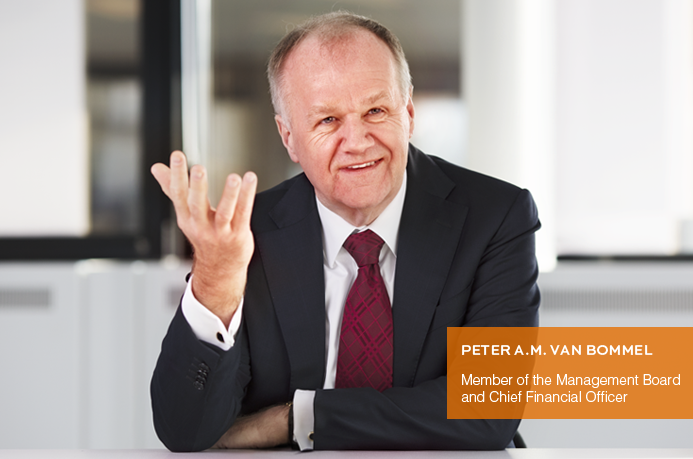 HOW WOULD YOU DESCRIBE ASMI’S FINANCIAL PERFORMANCE IN 2017?

We returned to growth again in 2017 with 23% higher sales of €737 million, which is a new record high. We benefited from a recovery in the single-wafer ALD market with healthy demand in the logic/foundry segment and substantially higher sales in the 3D-NAND segment of the memory market. We also made investments in new areas resulting in new tool wins in our epitaxy and PECVD product lines. While these new tool wins strongly contributed to our sales growth in 2017, the initial costs related to the launch of the new products in epitaxy and PECVD led to a decrease in our gross margin.

Operating expenses remained under control and decreased as a percentage of revenue from 30% to 26%. Operating profit increased 38% with the operating margin improving to 15.3% (2016: 13.8%).

Results from investments excluding amortization of intangible assets - reflecting our share of ASMPT’s net profits - showed a strong increase of 66% to €112 million. This is the balance of, on the one hand, a 89% increase in ASMPT’s net profits on a 100% basis and, on the other hand, a reduction of our stake in ASMPT during the year from approximately 39% to approximately 25%.

In total, our normalized net profits increased by 17% to €190 million. This increase was impacted by a negative currency translation effect of €31 million included in our financing costs. As we hold a substantial part of cash balances in US dollars and other foreign currencies, the appreciation of the euro during 2017 led to this negative translation effect. In 2016, financing costs still included a translation gain of €13 million. Apart from translation effects, the impact from exchange rate fluctuations on our relative profitability is limited, as the currency exposure of our sales largely matches that of our cost base.

WHAT EXPLAINS THE DECREASE IN GROSS MARGINS IN 2017?

Our gross margin dropped from 44.2% to 41.5% in 2017. This is fully explained by the initial costs of the newly introduced products in our epitaxy and PECVD activities. Excluding this impact, our gross margin would have been relatively stable in 2017. The gross margin was still steady at almost 44% in the first half but decreased, as we had announced with our second quarter results publication, to approximately 40% in the second half. Following the tool wins that we announced earlier in 2017 our sales in the third and fourth quarter included multiple units of the new epitaxy and PECVD systems. As these launches represent completely new products and applications, the first tools still carry a lower gross margin, which is not unusual for new product penetrations in the market. This is only a temporary effect. Margins on the new products are on track to improve and as a result we expect the gross margin for the total company to normalize again in the course of the year.

On a structural basis our gross margin is healthy. Over time, we implemented several programs that have improved the flexibility and efficiency of our manufacturing and supply chain operations. With an ongoing strong cost focus throughout our organization, we expect to maintain gross margins within a percentage range of low-to-mid 40s, barring a downturn in the semiconductor equipment market. On a quarterly basis, gross margins will continue to be impacted by factors such as revenue mix and utilization.

HOW HAS THE FREE CASH FLOW DEVELOPED IN 2017?

Over the last several years, we have consistently generated a positive free cash flow. For the full year 2017 free cash flow amounted to €32 million, approximately stable compared to 2016. The development in free cash flow was held back by a rise in working capital and an increase in capex. The rise in working capital is explained by higher accounts receivables due to the back-half weighted character of sales in the fourth quarter of 2017, which was even more pronounced than in 2016. In addition, inventories increased during 2017 and reflected our higher activity level including the new products in epitaxy and PECVD. The underlying quality of working capital remained healthy. Capital expenditure increased from €27 million to €44 million, largely related to the increase in our R&D activities. We are stepping up investments to prepare our company for the next stage of growth. In the last several years we could largely accommodate the increased demand within our existing facilities. To grow to structurally higher levels we plan to increase investments in the forthcoming periods. ALD continues to be an attractive growth market and in epitaxy and PECVD we now also have good opportunities for further expansion. Investments include the construction of a new facility and cleanroom in Korea and the construction of a new manufacturing facility in Singapore. After a first impact in 2017 these investments will lead to a higher level of capital expenditure in 2018-2019.

ASMI REDUCED ITS STAKE IN ASMPT IN 2017. WHAT WAS THE FINANCIAL IMPACT?

During the year we reduced our stake in ASMPT in two steps from approximately 39% to approximately 25%. In April 2017 we sold a 4.9% stake in a partial secondary share placement for proceeds of approximately €245 million. We used the proceeds for a new share €250 million buyback program that we started in September last year. Last November, we sold another 9.1% stake in ASMPT that generated proceeds of approximately €445 million. We intend to use approximately €220 million of these proceeds for a capital return of €4 per common share. This capital return will be effected to be free of dividend withholding tax and will be proposed to the AGM 2018. Moreover, we plan to use €250 million for a new share buyback program. Our reported net earnings in 2017 included a total result of €285 million related to the stake sales in ASMPT.

CAN YOU COMMENT ON THE STRONG CASH POSITION OF THE COMPANY?

The cash position of €836 million at the end of 2017 includes a large part of the cash proceeds of the ASMPT stake sales that we have committed to return to our shareholders. Our overall financial position continues to be healthy and enables us to continue investing in the growth of our business, which remains our key priority. Over the past few years our cash position has remained above our minimum target level of around €300 million. In line with our commitment to use excess cash for the benefit of our shareholders, we completed during 2017 our third consecutive €100 million share buyback program. We also started a new €250 million program that was 60% complete by the end of 2017 and 97% complete on March 9, 2018. During 2017 we returned approximately €285 million in total to shareholders in the form of dividends and share buybacks. This was up from €140 million in 2016 and €116 million in 2015.

Looking at 2018, next to the tax-efficient capital return and the announced new €250 million share buyback program, we will propose a dividend of €0.80 per share to the forthcoming AGM, which is an increase of 14% compared to last year. We will also propose the cancellation of 6 million shares. This will reduce the number of issued shares by almost 10%.

THIS YEAR ASMI DECIDED NOT TO PUBLISH A SEPARATE CORPORATE RESPONSIBILITY REPORT. CAN YOU EXPLAIN WHY?

During the last three years we published separate Corporate Responsibility reports as we wanted to highlight the progress we had made in strengthening corporate responsibility within our company. Over the last several years, we stepped up our efforts to reduce our environmental footprint, further strengthen our safety culture and strongly improve our Transparency Benchmark Evaluation score, just to mention a few examples. This year we decided to combine the Corporate Responsibility report and the Annual Report. While we recognize that a lot of work still needs to be done, we believe it is an important first step towards integrated reporting. In this way, we aim to increase the relevance and quality of our reporting for all our stakeholders and to further strengthen corporate responsibility in all aspects of our activities.