Discover more about our long-term value creation in this section

Discover more about how we integrate our responsible business practices

MESSAGE FROM THE CEO

In 2017 we achieved significant progress against our strategic targets. Our sales benefited from a clear recovery in the single-wafer Atomic Layer Deposition (ALD) market, in particular driven by strong increases in the 3D-NAND segment. During the year we also successfully expanded our position in the epitaxy market with an important tool win from a leading foundry customer. In total, our revenue increased by 23% to a new record level. 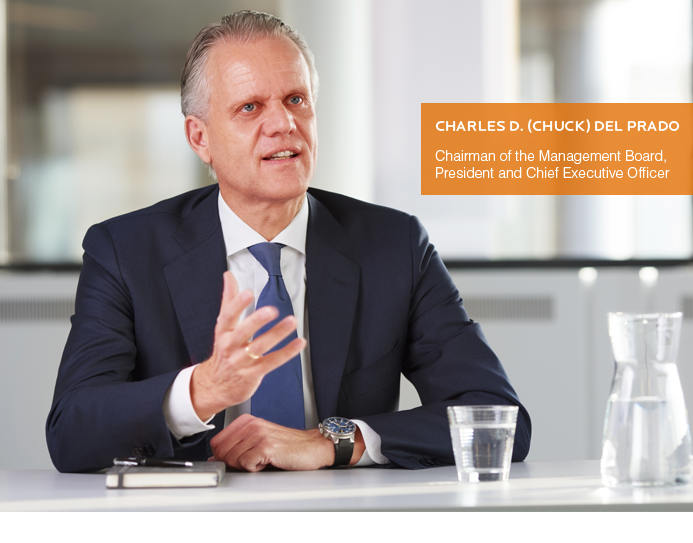 We continue to invest in new precision deposition applications that help our customers to transition to the next generations of ever faster and more power-efficient semiconductor devices. Our company remains well positioned for long-term value creation for all stakeholders.

Our achievements would not be meaningful if we did not achieve them responsibly. We continue to focus on improving the way we do business responsibly, in our operations, in our supply chain, and with our stakeholders. As of this report, we no longer report Corporate Responsibility separate from our Annual Report. This report is yet another step in further integrating our responsible business practices into our strategies and the value we bring to society.

RECOVERY IN OUR ALD BUSINESS

2017 was a year of strong growth for our industry. Worldwide semiconductor industry sales increased by more than 20% and were for a large part driven by favorable market conditions and price increases in the memory segments. The market for Wafer Fab Equipment (WFE) grew by approximately 30%. The growth in equipment spending was primarily driven by memory customers who invested in 3D-NAND capacity expansion, and by higher spending in upgrading existing capacity to advanced DRAM nodes. The logic/foundry segment of the WFE market was relatively stable in 2017.

After the drop in 2016, our DRAM business remained at a relatively low level in 2017. Our DRAM business failed to show the recovery in 2017 that we had expected earlier in the year. Investments by DRAM customers increased in 2017 but were mainly made within existing fabs with more reuse of existing equipment as a result. This had a negative impact on the demand for new single-wafer ALD patterning tools in particular. However, in the latter part of 2017 the first signs appeared of renewed capacity additions in the DRAM segment, which are likely to drive demand for new ALD patterning tools in the course of 2018.

In the logic/foundry segment of the single-wafer ALD market demand remained at a healthy level in 2017 following the strong sales increase that we achieved in 2016. Our customers in this segment continued to invest in the 10nm node and also made their first early investments in the next 7nm node. Single-wafer ALD is essential for several new critical process steps to build these advanced devices. During the year we achieved tool-of-record selections for multiple new ALD applications for the 7nm logic/foundry node. We expect that these new applications will further increase our addressable market for ALD.

Another highlight of 2017 was the launch of our new epitaxy tool, the Intrepid ES. The benefits of this tool versus our earlier Intrepid tool, include amongst others substantially improved temperature control capabilities which enables both enhanced process control and increased productivity. In April 2017, we announced that we won our first process tool-of-record selection for the Intrepid ES for an advanced epitaxy application at a leading foundry customer. With the successful launch of the Intrepid ES we are substantially increasing our addressable market in epitaxy. In earlier years we were mainly focused on the market segment for power and analog epitaxy applications. With the Intrepid ES we now also target advanced-node applications in logic/foundry and memory, which form the largest part of the epitaxy market.

The new customer win for our Intrepid ES tool drove a strong increase in our epitaxy sales in 2017, which approximately doubled compared to a lower base in 2016. Epitaxy is expected to be an attractive growth market, as it is a key technology that helps our customers to improve the transistor performance of their next generation devices. In addition, a stronger position in epitaxy will help us to further broaden our relationships with key customers and it will also provide a stronger and more diversified base to our revenue stream.

As part of our growth strategy we also invest selectively in other parts of our portfolio, next to ALD and epitaxy, where our solutions can make a difference for our customers. In 2017, this resulted in a new win in our Plasma Enhanced CVD (PECVD) activity in the 3D-NAND market, which also contributed to our revenue growth last year.

POSITIONED FOR GROWTH IN 2018

In our ALD activities we target an increase in our DRAM related activities. An expected increase in new DRAM capacity investments will likely drive some improvement in demand for new ALD patterning tools. In addition, we have been broadening our R&D-scope in the DRAM ALD market beyond applications in patterning, for which we expect the first results in 2019. We also expect to benefit from continued investments in the 10nm/7nm logic/foundry market. In 3D-NAND, we are focused on serving the current volume ramps at the 3D-NAND manufacturers and to position our company for a broader participation in this space.

For our product in epitaxy we expect traction to remain strong in 2018. As far as our other products PECVD and Vertical Furnace are concerned, we continue to invest in selected parts of these activities, which we expect will create growth opportunities in 2018. From a geographical point of view, we expect a higher sales contribution from China in 2018 following our investment to increase our presence in this market and as local Chinese customers are preparing for higher investments in more advanced technology nodes.

Our overall progress in operational excellence is also recognized by our customers and positions us well to continue to compete effectively in the future. Last December, ASMI received an Excellent Performance Award from TSMC, as one of seven equipment suppliers, in recognition of our technology and performance in development and production at TSMC fabs. This follows the award that we received from TSMC in February 2017 for the innovation, performance and support of ASMI’s ALD equipment and technology.

In March of 2018, we were recognized by Intel as a recipient of their Preferred Quality Supplier (PQS) award for our performance across 2017. The PQS award, the 2nd PQS win for ASMI, recognizes companies like ASMI that Intel believes have relentlessly pursued excellence and conducted business with resolute professionalism. The PQS award celebrates exceptional, persistent performance and the continuous pursuit of excellence.

In 2017, our shareholding in ASMPT contributed solidly to our net earnings. Normalized result from investments, which includes the contribution from ASMPT, increased by 66% to €112 million. ASMPT’s sales growth accelerated from 10% in 2016 to 23% in 2017. In Back-end equipment, the company performed very well in segments such as Back-end equipment for CMOS image sensors, power management and advanced packaging. In addition, ASMPT’s surface mount technology (SMT) solutions recorded particularly strong growth driven by automotive and industrial electronics and the latest upgrade cycle in the smartphone market. Based on its leading positions and diversified portfolio we believe ASMPT stands to benefit from broad-based market drivers.

With the recovery in our ALD business and a strongly increased contribution from our epitaxy and PECVD activities, our revenue increased by 23% in 2017 to a new record high. Our gross margins decreased from 44.2% to 41.5%, which is explained by the temporary effect of initial costs related to new epitaxy and PECVD product launches. With operating expenses remaining under control, our operating profit increased 38% to €113 million.

Our key priority is to maintain a strong balance sheet that enables us to continue investing in the growth of our business. Our commitment to use excess cash for the benefit of our shareholders remains unchanged. During 2017 we completed our third consecutive €100 million share buyback program. Furthermore, using the proceeds of the ASMPT stake sale of April 2017 we launched a new €250 million buyback program that was started in September 2017 and was for 97% complete per March 9, 2018. In addition, with the publication of our fourth quarter 2017 results we announced that we intend to use part of the proceeds of the ASMPT stake sale of November 2017 for a proposed tax-efficient return of capital of €4 per share to our shareholders, for a total amount of approximately €220 million. Moreover, we also announced that we plan to use €250 million for a new share buyback program. We will also propose to the Annual General Meeting of Shareholders 2018 an ordinary dividend of €0.80 per share, which is an increase of 14% compared to the dividend paid in 2017.

Our strategy continues to focus on further integrating Corporate Responsibility across all areas of our business, and we are well aligned with the United Nations Sustainable Development Goals (SDG). Our progress and results in 2017 are correlated with the SDG goals in the areas of Gender Equality, Decent Work and Economic Growth, Industry Innovation and Infrastructure, Responsible Consumption and Production, and Climate Action. Our contributions to these global goals are shared throughout this report.

We remain focused on supporting our customers in their relentless push to follow Moore’s Law. ALD is now firmly established as a key enabling technology that contributed to the introduction of several device generations in the memory and logic/foundry markets. As our industry moves to the next technology nodes, dimensions further scale and complex 3D device structures and new materials need to be introduced. The technology inflections on the roadmaps of our customers play to the strengths of ALD as these will drive the need for more precise deposition of ultra-thin and highly conformal films.

The continuous improvement in processing speed, storage capacity, energy efficiency and cost effectiveness of the most advanced semiconductor devices is a driving force behind the creation of new end market applications in areas such as artificial intelligence, cloud computing and IoT. The advances in semiconductor technology to which we contribute are therefore at the heart of new developments in for instance electric autonomous cars, innovations in healthcare and education and more efficient transportation systems, with potentially large benefits for our everyday lives and for society at large.

With an expanding number of applications, we remain confident that the single-wafer ALD market will over time grow as a percentage of the total deposition market. As a leader in ALD, ASMI continues to be well positioned to capture the growth expected in this market. In addition to further growth in our ALD activities, we expect an increased contribution from our epitaxy and PECVD activities. To prepare our company for the next stage of growth we intend to invest in the expansion and upgrading of our R&D and manufacturing facilities, which will be reflected in a higher level of our capital spending in the period 2017-2019.

We would like to thank our employees for their continued commitment and hard work: together as one ASMI team we have again made progress this year in many critical areas. We are also grateful for the trust of our customers and the continued support of our shareholders. Our focus remains the creation of sustainable value for all our stakeholders.